In the crypto markets, the most repeated word this month has been “contagion”.

The first half of 2022 has been one of the most negative for asset returns for over a century time frame. The S&P 500, with price data going back to 1927, showed that the first six months of this year have been the fourth worst of any year on record. Only 1932 (the Great Depression), 1962 (“Kennedy Slide ”), and 1970 (stagflation) saw the worst returns in the first half of the year. 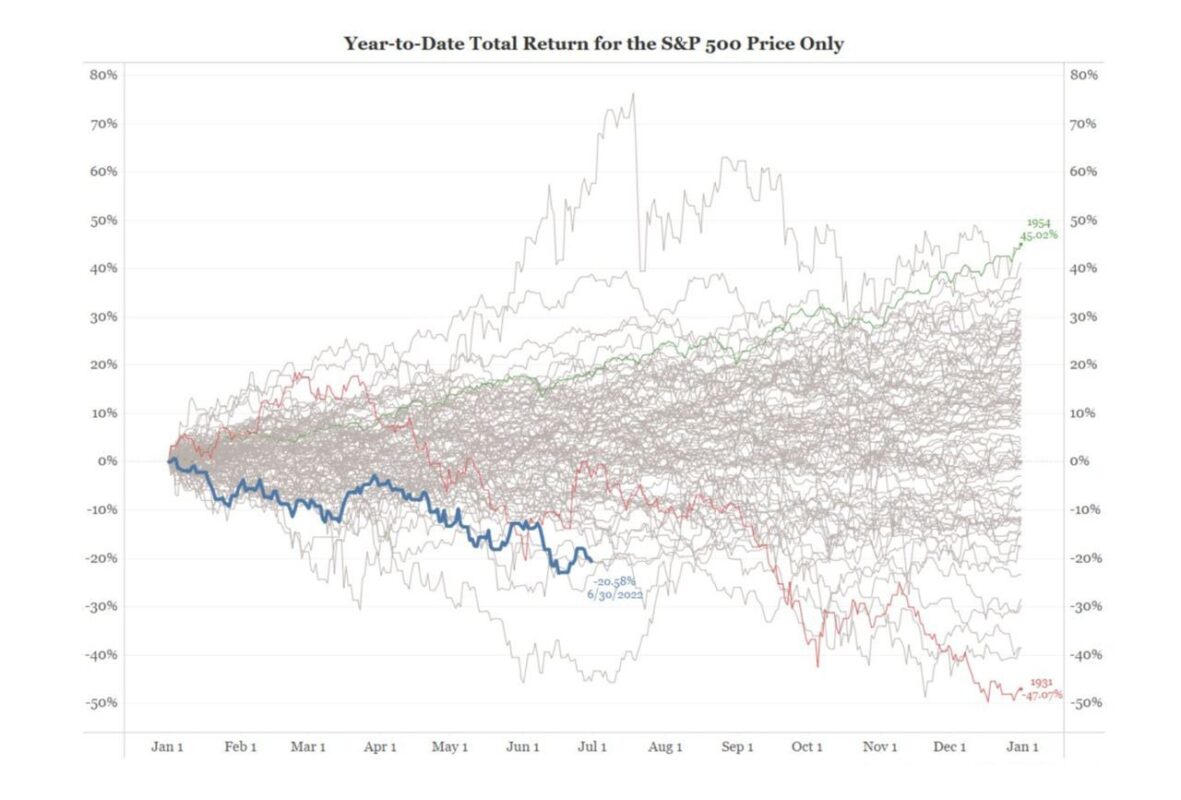 Bonds have been bouncing back in recent weeks due to the markets repricing the increasing odds of a recession. In such a scenario, demand for money would reduce and the Fed would ease its policy to fight back against economic slowdown. Nevertheless, the bond market continues to be a bad place to hide throughout the year. Given its low volatility (perceived as safe), its aggregate decline of -10.35% in H1 is comparable with Equities on a risk-adjusted basis. Risk parity portfolios or traditional 60/40 portfolios have been impacted heavily. The figure below, with data going back to 1976, shows that this year is easily the worst start on record. 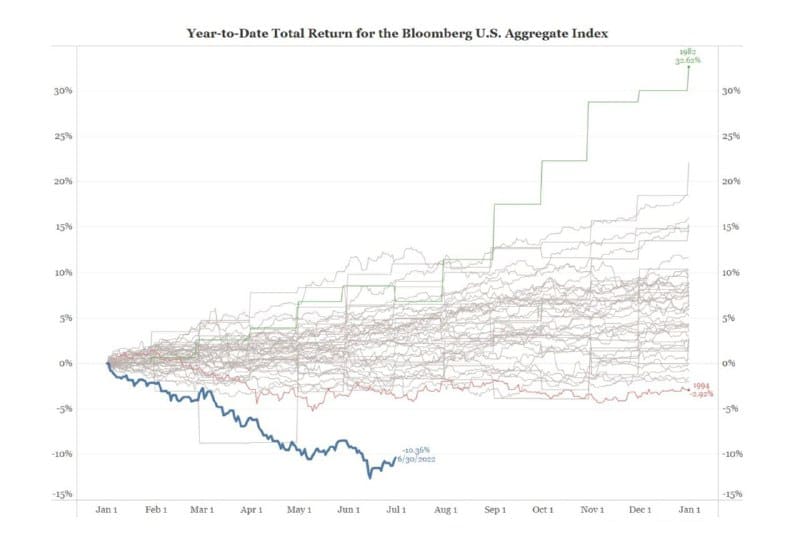 Commodities have been the one and only saver this year. This asset class has rarely produced this high performance for the first half of the year in any prior year. Despite a negative performance in June, it has still been the best placement this year so far. In the crypto markets, the most repeated word this month has been “contagion”. As we briefly mentioned in the previous post, the saga started with the liquidation of a large crypto hedge fund called Three Arrows Capital (3AC), then spread over to other lenders such as BlockFi, Voyager, and Genesis, etc. Genesis has been late to acknowledge a related loss in the order of a few hundred million dollars.

As we heard on the street, the miners are currently under a lot of pressure, especially European miners. Their break-even price would be around $24k a Bitcoin and a rising energy cost would make them even less competitive. If the miners are the next to have to deleverage, we would see more selling flows coming to the markets. The question is how impactful this selling is, as, after a few halvings, the Bitcoin block rewards granted to miners have reduced significantly.

The crypto price action this year so far has broken historical norms due to the forced selling of leveraged players. In other words, we think that no sensible participants would have wanted to sell under $40k per Bitcoin. However financial pressure, due to external factors such as macro monetary tightening, and internal factors such as their own margin requirement due to contagion, have forced many entities to let go of their position at distressed prices.

We maintain our view that the outlook for the rest of the year for risk assets remains modest. The recession in the US has practically become a reality that will put pressure on corporate earnings. For crypto, as we have seen in June, major deleveraging has already happened or is about to happen. So crypto could find its bottom before other markets. We are focusing on any price movement from now to late this year, as it could present an exceptionally good buy opportunity.

We are envisaging two scenarios:

An interesting question we were asked is how much probability we would give to either of the scenarios. In our opinion, in order to answer this question with high precision, one would need to have the full picture of the lending network among the crypto-native institutions, and/or how many Equities/Nasdaq investors are also crypto investors and their trading positions. It is difficult to know this information in detail. So we are assigning 50% probability to each. We will be very vigilant as either scenario’s probability approaches 100% in real-time.
Thank you for reading our post and we hope you will be exercising patience to seize opportunities when they come.\