We noted that as the Dollar gained strength, other risk-off assets such as Gold, also sold off. Bitcoin continued to move in a tight range.

In the background of the rate hike expectations described in our previous post, Chair Powell emphasized the importance of taming inflation as “absolutely essential”. Which triggered the market moves of the week as in the charts below.

VIX and Dollar increase steadily and in tandem with SP500 downs and Bitcoin, in the lack of any catalyst, follows closely. In particular, the Dollar index reaches the level only seen in March-2020.

While other assets, such as Equities for example, already run away very far from March-2020 levels as seen in the below chart.

We noted that as the Dollar gained strength, other risk-off assets such as Gold, also sold off, even in an inflationary environment macro-wise.

This was similar price action as in the Covid Crash of March 2020 when Gold and Bitcoin sold off when Dollar demand suddenly increased. However, the two market regimes differ by a lot of factors. 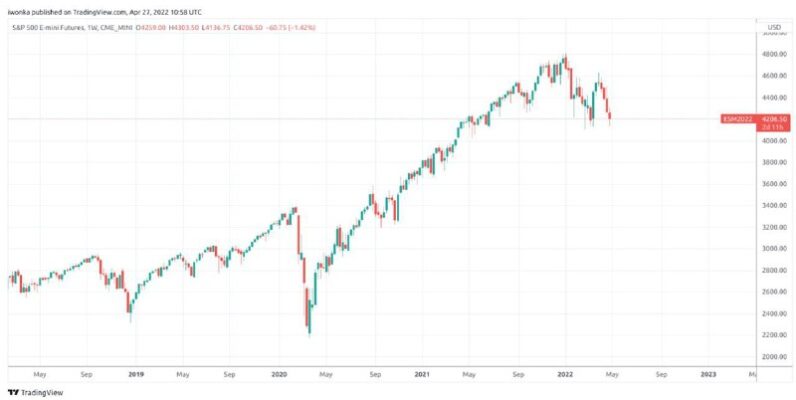 On the technical side, nothing changed much since our previous post. Bitcoin continued to move in a tight range and interestingly any time there were overly short positions the markets quickly corrected and reverted back to the neutral funding rate zone, even though Bitcoin might not reach its previous levels. 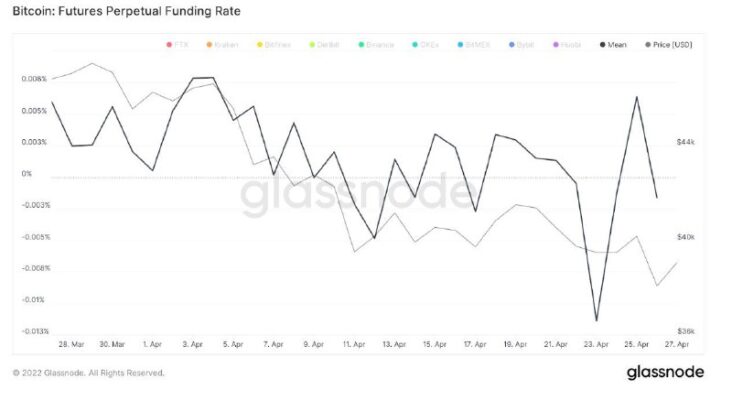 It was also consistent with the L/S ratio observed on the Binance exchange which has been the most important Bitcoin perpetual future market as of today. The two moments when the L/S ratio dropped (21-April and 26-April) coincided with market crashes which killed Long positions. 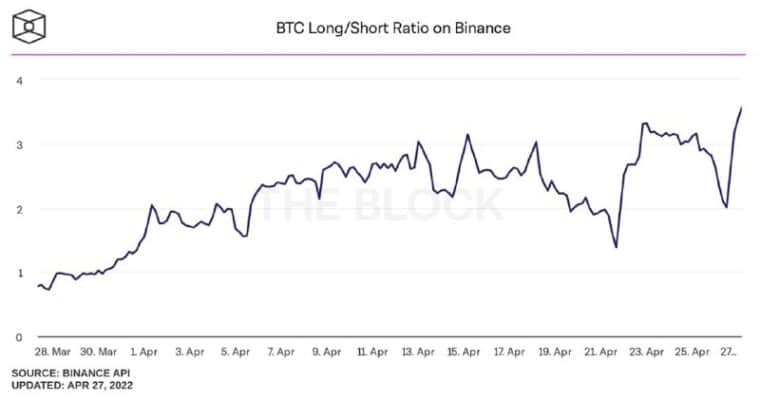 While the OI is not as high as in the summer of 2021 or when Bitcoin reached ATH in Nov-2021, aggregated OI is on its way to increasing slowly and steadily. Coupled with the L/S ratio from the above charts we can see that the market setup is quite skewed on the long positions, although not very highly leveraged as confirmed by the funding rate market.

Onchain data however still suggested we are in accumulation mode with a steady trend of Bitcoin leaving the exchanges. 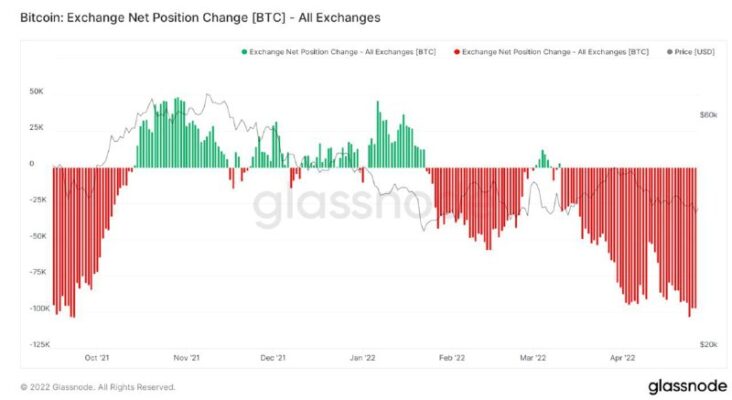 The market structure and the data point to an upcoming range-bound price action with accumulation for Bitcoin. All in all, for a market heavily driven by macro risk factors and the lack of any near-term catalyst. We remain cautious about any highly leveraged positions on both sides Long or Short. Our view is to skew allocation toward market-neutral strategies and maintain dry powder in case of any sudden/significant market crash.

As we highlighted in the previous post, the 40k level is important for Bitcoin. We believe the sub 40k price tag is a good long-term buy.
On the adoption side, one major news is Fidelity now offers clients to buy Bitcoin within their 401k account if their employers are willing to allow it and MicroStrategy, not surprisingly, is among the first ones to do it. While we think the most innovative enthusiasts among us have already aped into self-custodied crypto, the next billion people will more likely get exposure via a well-regulated and protected environment like that one.

Within the crypto market, one sector that still has had positive price action over the past week was “Move-to-earn” tokens. These are relatively new projects that gamify daily activities such as running or working out, promising to pay users for being active. These tokens seem to attract attention similar to the “Play-to-earn” trend last year. While real usage is still limited, the market is speculating on the novelty of the idea. The ticker that made waves recently was obviously $GMT, tradeable on Binance. It moved from a seed price of $0.01 to more than $3.

Thank you for your interest. Please check out 420da.org and app.420da.org to join our innovative DAO model.