$BTC seasonality has historically favored April, but not this year. It just had the worst April, returning MoM -17.3%.

There are many possible interpretations for this broken pattern. One can trace it back to the early-than-usual start of the bull market in Q3 2020. Due to anticipation of the post-halving price action, and Covid-19 stimulation packages. It is also the first time Bitcoin ($BTC) has become a macro asset. Which reacts to the Fed’s monetary policy and global geopolitical news. It is no coincidence that the Nasdaq index has also broken its year-low level of $13,000 this month.

Far out of the risk curve, in both the crypto market and the US tech sector, there are a large number of growth equity startups or companies. These are the entities that are burning cash in order to grow the market shares. The valuation methodology of such a business is known to have circular (or reflexive) characteristics, as a bigger future market share implies higher current valuation, and if private investors agree, higher valuation means bigger funding rounds. $BTC seasonality has historically favored April, but not this year. It just had the worst April, returning MoM -17.3%.which, in turn, raises the probability of gaining a bigger market share of such startups.

The fight of the Fed against inflation and imminent tighter monetary policy has impacted these sectors the most.
Interestingly Bitcoin has held up slightly better than the Nasdaq, which has returned -22% YTD and the Shitcoin Index Perpetual Futures (tradeable on FTX) drawdown is lower than ARK Innovation ETF’s (about 60% vs 70%). 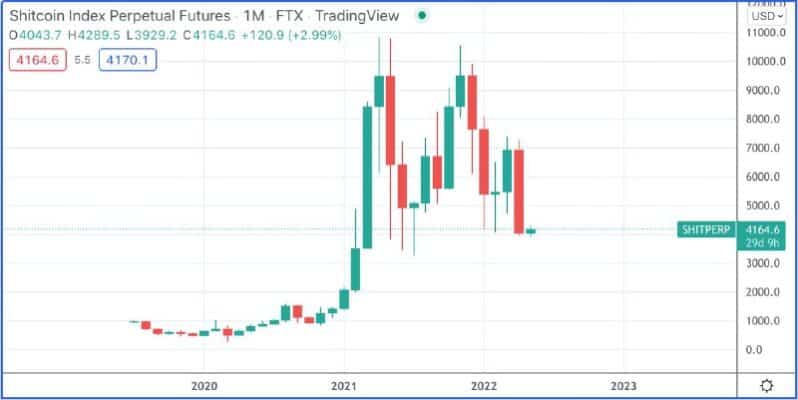 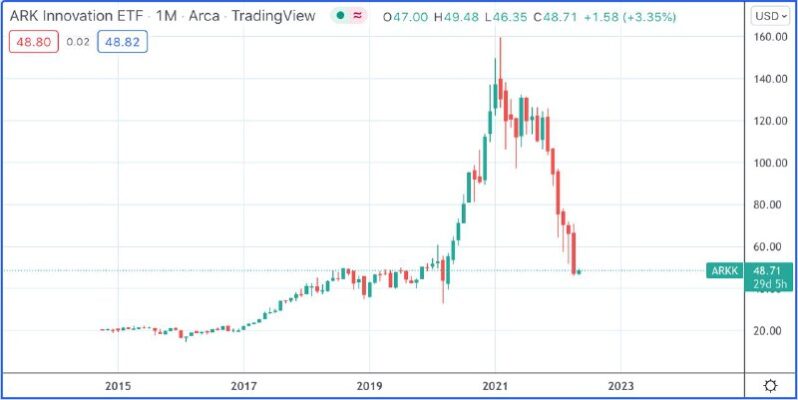 Regarding the derivatives markets: The crypto options were calm in the last week of April and pointing to the upside. Bitcoin option block trades (i.e. big trades which are mostly agreed on an OTC basis) have much higher Call volume than Put volume (above X-axis are Calls, below are Puts).

Implied vols are in-line with the monthly average level around 55-60%, with realized vol picked up to cross the 60% level due to the market moves in the last week of April. 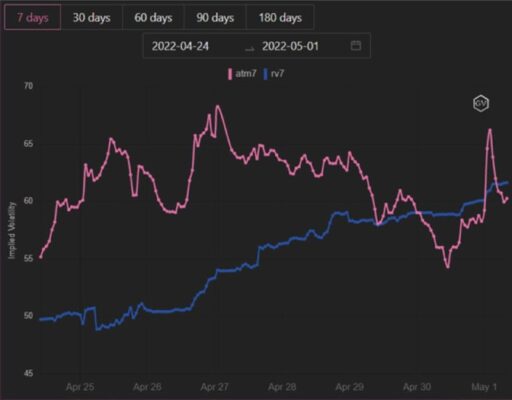 In the futures market: It seems big players have been firmly maintaining their positions since December. As of now, it is hard to say if those open interests are of speculative or protective nature. The former would mean once $BTC breaks its range again, there would be large positions unwind from wrong traders; while the latter could signal institutions are now paying attention to the funding basis and are keen to put on trades for yield generation purposes. 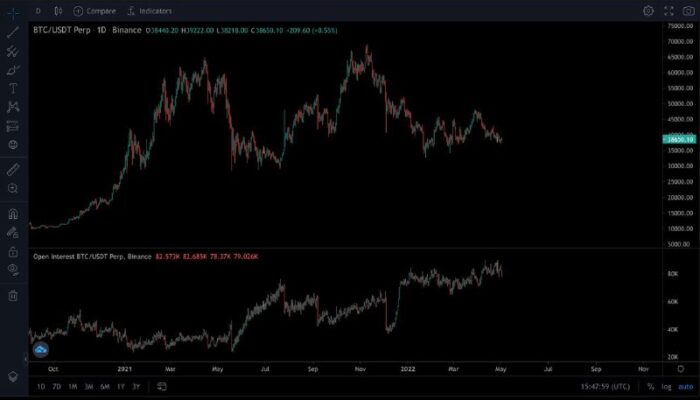 It will be particularly informative to watch how crypto funding basis is viewed as yield as real rates move higher after the next several Fed hikes. As we showed in Post #2, the ongoing crypto winter has compressed the funding basis. If rates move up, the question will be whether certain players would leave the crypto space to “farm” the higher real yield. This would create potential unwinding of hedged futures positions.

Technically speaking, as we mentioned in our previous posts, Bitcoin is still in its range, which has widened during April, and now settling as [37k, 48k].
As we have stated before, we believe the sub 40k level for $BTC is an attractive buy level. One of our proprietary signals has stopped flashing Sell for a while.

On the adoption side, notable news of the week is Goldman Sachs offering a Bitcoin-backed loan; and BlackRock debuting its ‘Blockchain and Tech’ ETF https://www.bloomberg.com/news/articles/2022-01-21/blackrock-plans-blockchain-and-tech-etf-amid-crypto-meltdown

Yuga Labs (issuer of the very successful NFT called BAYC and ApeCoin) has hinted to debut its own chain to avoid the high fee of $ETH.

Another intriguing story is 0xSifu – the character behind the Quadriga drama – who seems to be backing Aurora (a blockchain in the $NEAR ecosystem) with funding from his own venture fund.